Suppose you want to build a robot to achieve some real-world goal for you—a goal that requires the robot to learn for itself and figure out a lot of things that you don’t already know.1 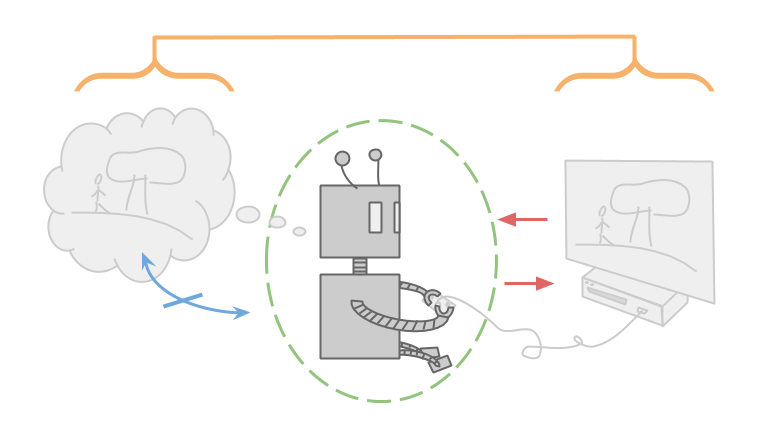 Notice that all the properties I talked about are partially made possible by the fact that Alexei is cleanly separated from the environment that he is optimizing.

This is Emmy. Emmy is playing real life. Real life is not like a video game. The differences largely come from the fact that Emmy is within the environment that she is trying to optimize.

Alexei sees the universe as a function, and he optimizes by choosing inputs to that function that lead to greater reward than any of the other possible inputs he might choose. Emmy, on the other hand, doesn’t have a function. She just has an environment, and this environment contains her.

Emmy wants to choose the best possible action, but which action Emmy chooses to take is just another fact about the environment. Emmy can reason about the part of the environment that is her decision, but since there’s only one action that Emmy ends up actually taking, it’s not clear what it even means for Emmy to “choose” an action that is better than the rest.

Alexei can poke the universe and see what happens. Emmy is the universe poking itself. In Emmy’s case, how do we formalize the idea of “choosing” at all?

This causes a problem: Bayesian reasoning works by starting with a large collection of possible environments, and as you observe facts that are inconsistent with some of those environments, you rule them out. What does reasoning look like when you’re not even capable of storing a single valid hypothesis for the way the world works? Emmy is going to have to use a different type of reasoning, and make updates that don’t fit into the standard Bayesian framework.

Since Emmy is within the environment that she is manipulating, she is also going to be capable of self-improvement. But how can Emmy be sure that as she learns more and finds more and more ways to improve herself, she only changes herself in ways that are actually helpful? How can she be sure that she won’t modify her original goals in undesirable ways?

In addition to hazards in her external environment, Emmy is going to have to worry about threats coming from within. While optimizing, Emmy might spin up other optimizers as subroutines, either intentionally or unintentionally. These subsystems can cause problems if they get too powerful and are unaligned with Emmy’s goals. Emmy must figure out how to reason without spinning up intelligent subsystems, or otherwise figure out how to keep them weak, contained, or aligned fully with her goals.

Emmy is confusing, so let’s go back to Alexei. Marcus Hutter’s AIXI framework gives a good theoretical model for how agents like Alexei work:

The model has an agent and an environment that interact using actions, observations, and rewards. The agent sends out an action \(a\), and then the environment sends out both an observation \(o\) and a reward \(r\). This process repeats at each time \(k…m\).

Each action is a function of all the previous action-observation-reward triples. And each observation and reward is similarly a function of these triples and the immediately preceding action.

You can imagine an agent in this framework that has full knowledge of the environment that it’s interacting with. However, AIXI is used to model optimization under uncertainty about the environment. AIXI has a distribution over all possible computable environments \(q\), and chooses actions that lead to a high expected reward under this distribution. Since it also cares about future reward, this may lead to exploring for value of information.

We will call agents like AIXI and Alexei “dualistic.” They exist outside of their environment, with only set interactions between agent-stuff and environment-stuff. They require the agent to be larger than the environment, and don’t tend to model self-referential reasoning, because the agent is made of different stuff than what the agent reasons about.

AIXI is not alone. These dualistic assumptions show up all over our current best theories of rational agency.

I set up AIXI as a bit of a foil, but AIXI can also be used as inspiration. When I look at AIXI, I feel like I really understand how Alexei works. This is the kind of understanding that I want to also have for Emmy.

Unfortunately, Emmy is confusing. When I talk about wanting to have a theory of “embedded agency,” I mean I want to be able to understand theoretically how agents like Emmy work. That is, agents that are embedded within their environment and thus:

You shouldn’t think of these four complications as a partition. They are very entangled with each other.

For example, the reason the agent is able to self-improve is because it is made of parts. And any time the environment is sufficiently larger than the agent, it might contain other copies of the agent, and thus destroy any well-defined i/o channels. However, I will use these four complications to inspire a split of the topic of embedded agency into four subproblems. These are: decision theory, embedded world-models, robust delegation, and subsystem alignment.

Decision theory is all about embedded optimization.

The simplest model of dualistic optimization is \(\mathrm{argmax}\). \(\mathrm{argmax}\) takes in a function from actions to rewards, and returns the action which leads to the highest reward under this function. Most optimization can be thought of as some variant on this. You have some space; you have a function from this space to some score, like a reward or utility; and you want to choose an input that scores highly under this function.

But we just said that a large part of what it means to be an embedded agent is that you don’t have a functional environment. So now what do we do? Optimization is clearly an important part of agency, but we can’t currently say what it is even in theory without making major type errors.

Some major open problems in decision theory include:

Embedded world-models is about how you can make good models of the world that are able to fit within an agent that is much smaller than the world.

It is also about how to make world-models from the point of view of an observer on the inside, and resulting problems such as anthropics. Some major open problems in embedded world-models include:

There are extra problems coming from the Löbian obstacle making it impossible to consistently trust things that are more powerful than you.

The major open problems in robust delegation include:

Subsystem alignment is about how to be one unified agent that doesn’t have subsystems that are fighting against either you or each other.

When an agent has a goal, like “saving the world,” it might end up spending a large amount of its time thinking about a subgoal, like “making money.” If the agent spins up a sub-agent that is only trying to make money, there are now two agents that have different goals, and this leads to a conflict. The sub-agent might suggest plans that look like they only make money, but actually destroy the world in order to make even more money.

A lot of optimization in practice uses this kind of passing the buck. You don’t just find a solution; you find a thing that is able to itself search for a solution.

In theory, I don’t understand how to do optimization at all—other than methods that look like finding a bunch of stuff that I don’t understand, and seeing if it accomplishes my goal. But this is exactly the kind of thing that’s most prone to spinning up adversarial subsystems.

The big open problem in subsystem alignment is about how to have a base-level optimizer that doesn’t spin up adversarial optimizers. You can break this problem up further by considering cases where the resultant optimizers are either intentional or unintentional, and considering restricted subclasses of optimization, like induction.

But remember: decision theory, embedded world-models, robust delegation, and subsystem alignment are not four separate problems. They’re all different subproblems of the same unified concept that is embedded agency.

Part 2 of this post will be coming in the next couple of days: Decision Theory.