I.e., maximize some function of the action. This tends to assume that we can detangle things enough to see outcomes as a function of actions.

For example, AIXI represents the agent and the environment as separate units which interact over time through clearly defined i/o channels, so that it can then choose actions maximizing reward. 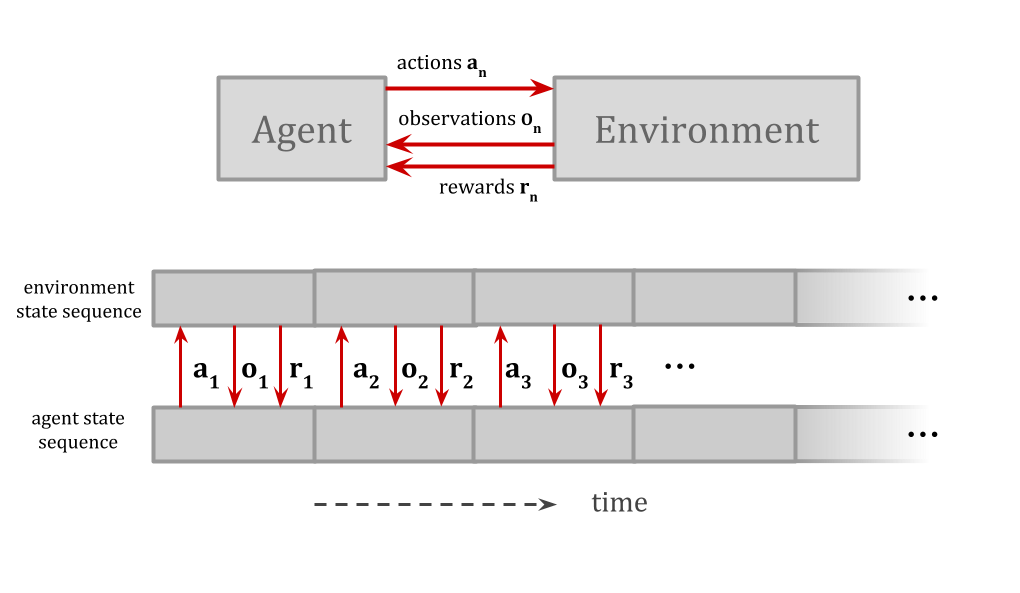 When the agent model is a part of the environment model, it can be significantly less clear how to consider taking alternative actions.

For example, because the agent is smaller than the environment, there can be other copies of the agent, or things very similar to the agent. This leads to contentious decision-theory problems such as the Twin Prisoner’s Dilemma and Newcomb’s problem.

If Emmy Model 1 and Emmy Model 2 have had the same experiences and are running the same source code, should Emmy Model 1 act like her decisions are steering both robots at once? Depending on how you draw the boundary around “yourself”, you might think you control the action of both copies, or only your own.

Problems of adapting decision theory to embedded agents include:

The difficulty with counterfactuals can be illustrated by the five-and-ten problem. Suppose we have the option of taking a five dollar bill or a ten dollar bill, and all we care about in the situation is how much money we get. Obviously, we should take the $10.

However, it is not so easy as it seems to reliably take the $10 when the agent knows its own behavior. If you reason about yourself as just another part of the environment, then you can know your own action. If you can know your own action, then it becomes difficult to reason about what would happen if you took different actions. This means an agent can stably take the $5 because it believes “If I take the $10, I get $0”!

Because the agent doesn’t know how to separate itself from the environment, it gets gnashing internal gears when it tries to imagine taking different actions.

This is an instance of the problem of counterfactual reasoning: how do we evaluate hypotheticals like “What if the sun suddenly went out”?

Why might an agent come to know its own action before it has acted?

Perhaps the agent is trying to plan ahead, or reason about a game-theoretic situation in which its action has an intricate role to play.

But the biggest complication comes from Löb’s Theorem. This can be illustrated more clearly by looking at the behavior of simple logic-based agents reasoning about the five-and-ten problem.

We have the source code for an agent and the universe. They can refer to each other through the use of quining. The universe is simple; the universe just outputs whatever the agent outputs.

It seems easy when you just imagine an agent trying to reason about the universe. Yet it turns out that if the amount of time spent searching for proofs is enough, the agent will always choose \(5\)!

We call this a “spurious proof”: the agent takes the $5 because it can prove that if it takes the $10 it has low value, because it takes the $5. More generally, when working in less proof-based settings, we refer to this as a problem of spurious counterfactuals.

The general pattern is: counterfactuals may spuriously mark an action as not being very good. This makes the AI not take the action. Depending on how the counterfactuals work, this may remove any feedback which would “correct” the problematic counterfactual; or, as we saw with proof-based reasoning, it may actively help the spurious counterfactual be “true”.

Note that because the proof-based examples are of significant interest to us, “counterfactuals” actually have to be counterlogicals; we sometimes need to reason about logically impossible “possibilities”. This rules out most existing accounts of counterfactual reasoning.

You may have noticed that I slightly cheated. The only thing that broke the symmetry and caused the agent to take the $5 was the fact that “\(5\)” was the action that was taken when a proof was found, and “\(10\)” was the default. We could instead consider an agent that looks for any proof at all about what actions lead to what utilities, and then takes the action that is better. This way, which action is taken is dependent on what order we search for proofs.

People often try to solve the problem of counterfactuals by suggesting that there will always be some uncertainty. An AI may know its source code perfectly, but it can’t perfectly know the hardware it is running on.

Does adding a little uncertainty solve the problem? Often not:

Consider this scenario: You are confident that you almost always take the left path. However, it is possible (though unlikely) for a cosmic ray to damage your circuits, in which case you could go right—but you would then be insane, which would have many other bad consequences.

If this reasoning in itself is why you always go left, you’ve gone wrong.

So I’m not talking about agents who know their own actions because I think there’s going to be a big problem with intelligent machines inferring their own actions in the future. Rather, the possibility of knowing your own actions illustrates something confusing about determining the consequences of your actions—a confusion which shows up even in the very simple case where everything about the world is known and you just need to choose the larger pile of money.

Maybe we can force exploration actions, so that we learn what happens when we do things? This proposal runs into two problems:

But writing down examples of “correct” counterfactual reasoning doesn’t seem hard from the outside!

Maybe that’s because from “outside” we always have a dualistic perspective. We are in fact sitting outside of the problem, and we’ve defined it as a function of an agent. However, an agent can’t solve the problem in the same way from inside. From its perspective, its functional relationship with the environment isn’t an observable fact. This is why “counterfactuals” are called what they are called, after all. Finding a way to succeed at a decision problem involves finding an agent that when plugged into the problem takes the right action. The fact that we can even consider putting in different agents means that we have already carved the universe into an “agent” part, plus the rest of the universe with a hole for the agent—which is most of the work!

Are we just fooling ourselves due to the way we set up decision problems, then? Are there no “correct” counterfactuals?

Well, maybe we are fooling ourselves. But there is still something we are confused about! “Counterfactuals are subjective, invented by the agent” doesn’t dissolve the mystery. There is something intelligent agents do, in the real world, to make decisions.

Updateless decision theory (UDT) views the problem from “closer to the outside”. It does this by picking the action which the agent would have wanted to commit to before getting into the situation.

Bob has a proper scoring rule, so does best by giving his true belief. Alice just wants Bob’s belief to be as much toward “low” as possible.

Suppose Alice will play only this one time. She sees a low card. Bob is good at reasoning about Alice, but is in the next room and so can’t read any tells. Should Alice reveal her card?

Since Alice’s card is low, if she shows it to Bob, she will lose no money, which is the best possible outcome. However, this means that in the counterfactual world where Alice sees a high card, she wouldn’t be able to keep the secret—she might as well show her card in that case too, since her reluctance to show it would be as reliable a sign of “high”.

On the other hand, if Alice doesn’t show her card, she loses 25¢—but then she can use the same strategy in the other world, rather than losing $1. So, before playing the game, Alice would want to visibly commit to not reveal; this makes expected loss 25¢, whereas the other strategy has expected loss 50¢.

This game is equivalent to the decision problem called counterfactual mugging. UDT solves such problems by recommending that the agent do whatever would have seemed wisest before—whatever your earlier self would have committed to do.

UDT is an elegant solution to a fairly broad class of decision problems. However, it only makes sense if the earlier self can foresee all possible situations.

This works fine in a Bayesian setting where the prior already contains all possibilities within itself. However, there may be no way to do this in a realistic embedded setting. An agent has to be able to think of new possibilities—meaning that its earlier self doesn’t know enough to make all the decisions.

And with that, we find ourselves squarely facing the problem of embedded world-models.